Reporting to the Highness of Blogdome

Oh, yeah, this is going very well. Very, very well. I've just returned for a few seconds to visit my new highly-successful, completely absent, dried-up blog in hiding that went into hibernation 15 seconds after its big-bang re-creation. This looks like it's going to be really big one day. I'll say.

I can't believe I restored my full Internet connection so I can give my laptop battery some rest. What from, Solitaire? What for, a few minutes on Yahoo Answers? Meanwhile, I've missed out on virtually nothing in our little chassidishe blog community, which, while I would've ranted furiously if I did, I'm ranting furiously that I didn't. Something has become so secular, educational and formal about the online blog community for -ironically- the very nisht secular, that the real issues have graduated and been filed away at Hasidic Rebel's archives.

But not surprisingly, XGH developments continued to come fast, insensitive to me huffing and puffing and trying to follow along, so I missed some pivotal events. He's declared the end of his blog, of all things! I'm not sure if that's a routine posting where he tries to grab control of the wheel of his life, before he gets swapped away by the claws of fame and blogging-adrenaline that drives him. Or if it's something that after a period of shiva, I'll realize is really gone. I hope it's just a routine pause when the kneeling fans are supposed kiss his toes. That I can live with.

There was so much to post here, so few to read. Not surprisingly, nothing was said. It's a shame there have been significant events in my life in particular and our lives in general that weren't vented. That's something to vent about, over and over again.

Oy. Like I said, this is going really well.

The blogging community is in a silence before a storm mode. someone needs to through in the match. cheer up! let the venting begin.

Nice to see your blog is back, it was locked up for 'invited readers only' for too long..

I would really appreciate, if you could write to me sometime and bring me up to speed on you and your family.. 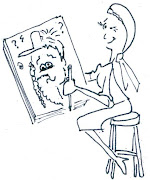